Why Did The Japanese Attack Pearl Harbor? 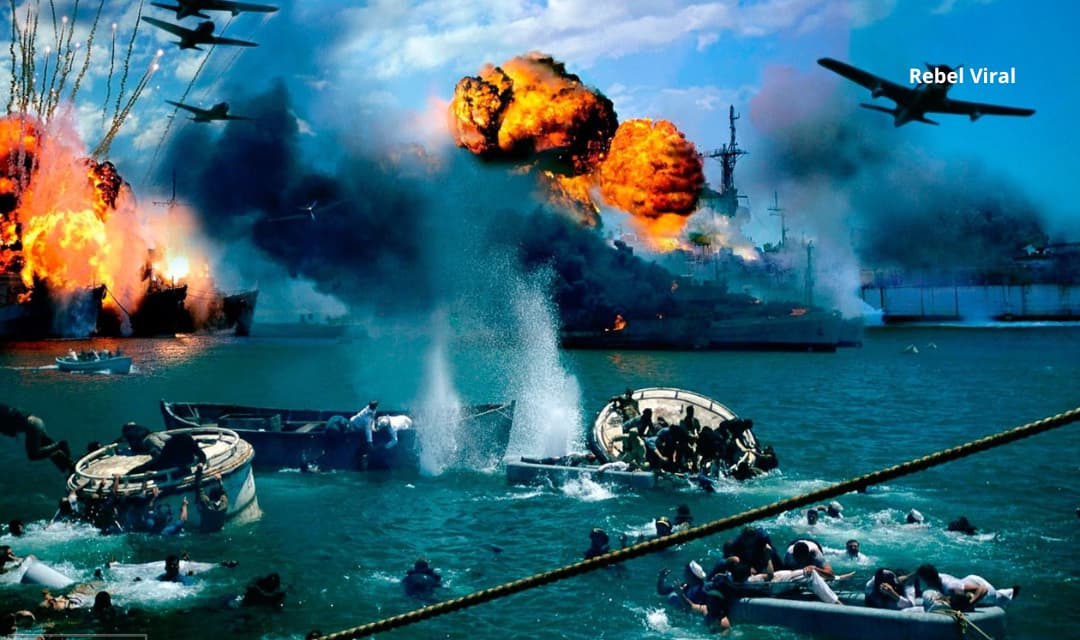 Why Did The Japanese Attack Pearl Harbor?

If you’ve ever wondered why the Japanese attacked Pearl Harbor, you’re not alone.

There are many reasons why Japan attacked Pearl Harbor, and you might even be wondering how long it lasted.

You may also want to know how many people died during the attack. This article will help you understand why this historic incident happened.

Why did the Japanese attack pearl harbor? – Japanese Attack

The Japanese had been discussing the possibility of attacking the US for several months, but negotiations between the US and Japan failed to produce a resolution.

When this happened, Japan decided to strike first. They believed that the Americans would be shocked by the attack and would be more willing to accept peace with the Japanese.

Do You Know! Questions and answers about double din radio

During this time, Admiral Isoroku Yamamoto had proposed an unusual tactic, a sneak attack on Pearl Harbor.

His plan would completely change two decades of Japanese naval strategic thinking. It was a radical shift in thinking, and the Japanese Navy General Staff had been arguing against it for nine months.

However, despite this reversal in thinking, Japanese plans and training proved to be inadequate.

The US naval intelligence system missed this shift because it assumed the Japanese carriers would remain in their home waters and that no one would launch an attack on Pearl Harbor.

Another reason for the Japanese attack was Japan’s aggression in China. This began in 1937 and continued throughout 1941.

As a result of this aggression, the US government imposed sanctions on Japan.

It also refused to sell crucial raw materials to Japan. Because of these actions, it became clear that war was inevitable.

The Japanese also sought to expand their empire. They wanted to conquer the Dutch East Indies and Malaya, which were rich in natural resources.

They also hoped to conquer the Philippines and Malaya while America was still recovering. This strategy posed a serious threat to the U.S. military.

After World War I, Japan had gained control of territories in Asia. Despite this, it was still facing opposition from the U.S. and other colonial powers.

In addition, the American government had imposed economic sanctions against Japan, including the ban on aviation gasoline and scrap metal exports. In summer and fall 1941, the United States also placed an embargo on oil exports to Japan.

Reasons for the Japanese attack on pearl harbor

The Japanese attack on Pearl Harbor was an unexpected military strike by the Imperial Japanese Navy.

It took place on Sunday, December 7, 1941. While there are many reasons for this attack, it was mainly motivated by the desire to gain more control over the Pacific.

In particular, the attack was aimed at destroying the USS Arizona.

Japan wanted to conquer the Philippines and Malaya. These countries were rich in natural resources, and they wanted to control them.

They also wanted to control the natural resources of the Pacific. By attacking Pearl Harbor, the Japanese government hoped to cripple the American military and set up a powerful fortress throughout the Pacific Rim.

After the Japanese attack, the US Navy took immediate action. They dispatched an armada of six aircraft carriers and 414 planes.

The Japanese commander of the fleet was Admiral Yamamoto Isoroku, who studied at Harvard and served as the Japanese Naval Attache in Washington, DC. The Japanese had three months to get the US Navy to surrender.

While the US Navy had an increased presence in Hawaii, it had not been fully prepared for the Japanese attack.

The move of the US Pacific Fleet to Hawaii was seen by the Japanese as a threat to their empire.

For decades, the Japanese and US Militaries had discussed the possibility of war, but neither side thought that it would happen first.

The Japanese had been acquiring a large empire in the south-east Asia region.

Do You Know! Flights from Major Airports & Why You Should Consider Flying To MSP

The US government had been trying to negotiate a deal with Japan to end the U.S. embargo. However, the negotiations were ineffective.

As a result, Konoe resigned on October 16, and his successor General Hideki Tojo became the war minister.

Both sides then decided to continue negotiations until late November, and they knew that war was inevitable if they were unable to reach an agreement.

How long did the attack on pearl harbor last?

When the Japanese launched their attack on Pearl Harbor, they were attempting to destroy the American Pacific Fleet.

The armada was comprised of 414 planes on six aircraft carriers. Their goal was to destroy Pearl Harbor in order to prevent the United States from responding to the Japanese armed forces in the South Pacific.

In the aftermath of the attack, the U.S. did not sleep at the wheel. The Roosevelt administration had been playing hardball with Japan for years, as they wanted them to refrain from their conquest of China.

They had also placed embargoes on strategic goods and raw materials, including aviation fuel and scrap iron.

The United States had also placed a freeze on Japanese assets in the summer of 1941, making it impossible for Japan to buy oil.

The Japanese first wave of attacks on Pearl Harbor lasted about two hours. It killed over two hundred American servicemen and hit all four battleships.

Two were completely destroyed. After the first attack, the Japanese air forces requested a third strike, but this request was declined.

As a result, the Japanese assumed the attack was a success, as the most important US ships were off on maneuvers.

Meanwhile, the US oil supply, submarine fleet, and repair facilities were unharmed. The Japanese then continued the assault on US and British bases in the Philippines and Malaya.

The Japanese attack on Pearl Harbor occurred before the formal declaration of war by Japan.

Admiral Yamamoto had specified the timing of the attack at thirty minutes after the peace talks ended.

The Japanese were able to get their aircraft into the air before the notification was delivered.

The Japanese sent a 5000-word notification to the Japanese Embassy in Washington, but it took too long to translate, and the ambassador did not get the message until an hour after the attack.

How many died in pearl harbor?

The Japanese attacked Pearl Harbor on December 7, 1941. It was the largest sea attack in history, and it caused the death of over 2,000 Americans.

The United States military reacted to the attack with remarkable courage. Many of the soldiers and sailors fought without weapons, risking their own lives to save comrades.

Pilots also engaged the Japanese aircraft despite the overwhelming odds. While the Japanese claimed losses of 30 planes and 55 men, many civilians were also killed or injured.

While the attack was a devastating blow for the US military, President Roosevelt did not hesitate to enter the war.

The attack occurred before Japan had formally declared war on the United States.

Admiral Yamamoto had specified a thirty-minute window after the end of peace negotiations to launch the attack. The US was unable to deliver the notice in time.

In addition, it took too long to transcribe the message. As a result, the Japanese were not notified of the attack until an hour after the Japanese had struck.

The attack also served as a defining moment for the Pacific War. It emphasized the importance of operating as a joint force and the delicate balance between training and readiness.

In addition, it led to the internment of many Japanese-Americans, and a segregated military force.

The 100th Infantry Battalion and the 522nd Field Artillery Battalion were composed of Hawaiian nisei, or Japanese-Americans.

In total, over 33,000 nisei served in the armed forces and eight hundred of them were killed in action.

The pre-war military strategy of the United States and Britain was to build strong forces in the west and east, and deter the Japanese from attacking the US.

They did this by warning that the Pacific would be a two-front war, and thus they would not be able to defend itself. After the war, Japan became an important ally of the United States.

What happened after pearl harbor?

The Japanese attack on Pearl Harbor was the first major act of war. It sparked the start of World War II and a lot of things changed afterwards.

It led to internment camps for Japanese, Germans, and Italians, and ended with the unconditional surrender of Japan.

The attack also changed the face of the Pacific Ocean, with the United States becoming the dominant world power.

The attack sparked American solidarity and pushed the American military into overwhelming resources in the Pacific and European theaters.

The Japanese air force also launched attacks on several military installations on the island of Oahu, part of the American Territory.

Using aircraft carriers, the U.S. Navy was able to slow down the Japanese advance and stall their counterattack.

The attack on Pearl Harbor united the nation, and it was one of the rare galvanizing events of American history.

The attack would not be repeated until the terrorist attacks on New York and Washington, D.C. In the days after the attack, many deck logs were written as routine administrative documents.

These documents give a context for the events of the day and the days that followed.

After Pearl Harbor, America was divided in two: there were proponents of entering the war with Japan, while opponents wanted peace.

In fact, many people in the midset wanted to enter World War 2. The attack shook the nation’s confidence in its military, and the United States declared war on the Empire of Japan.

Despite the initial opposition to entry into the war, many Americans felt that the US entered the war without knowing the full implications of its actions.

The war also led to the death of many American sons and fathers.

After the attack, President Roosevelt appointed the Roberts Commission, a panel of U.S. Supreme Court Justice Owen Roberts, to investigate the events.

The commission investigated the circumstances of the attack and the actions of the Japanese military leaders.

The committee found that the two commanders of the Army and the Navy had failed to carry out their duties properly. In addition, the report revealed the existence of a Japanese spy network.